Rise of Legends Demo 2 is out!

It is 720 mb. To download it go to the Rise of Legends Official site. In case that’s too busy, you can also grab it at Filefront from this link. Have fun!

VGM daily released 2 podcasts which includes their intreview with Brian Reynolds on gaming industry in general and Rise of Legends. Download them here: Part 1 and Part 2. Enjoy!

This one is featuring a Cuotl base which is located at the top of a mountain and their awesome air force led by Shok. Check it out here.

And it is offical! For more information check fact sheet at GameSpot. Congrats to BHG and MS. Let the party begin!

We got another big batch of pictures from Big Huge Games this week. In fact we’ve had to open a second Concept Art album cause we just couldnt put everything they have us in just one album. So you can check out the new goodies here. Oh there’s also some new stuff in the beta screenshots and renders albums as well, so don’t forget to check them out too!

Gaming Excellence has published a new interview with Big Huge Games’ Brian Reynolds. They talk about Brian Reynolds history in the gaming industry, but also confirms the Rise of Legends will be out on May 9th! Thanks to Evolved for the headsup!

We have a bunch of community enthusiats whose already produced some new maps and mods for Rise of Legends. We have Evolved with his Harsh Steppe Map. Lord Of Legends with Grassy Foothills Map. Joeking14 with a 2vs2 Map. Plus we now have a tonne of Cuotl mods. Contributers include: ZalTorin, Doggiedoodle, Lord Of Legends, Joeking14. Each with their own way and take on getting the Cuotl back into the demo. You can check them all out in our mod section

Voting for your Favourite ROL Caption

Just a couple days left to vote for your favorite entry in the Rise of Legends Heaven Caption contest. You can view the entries here and vote in the forum thread.

New weekly screenshot for RoL shows us 3 Fanes transporting a deadly Cuotl army which contains sentinels. Check it out here!

Joe from Big Huge Games has released another batch of goodies for their Rise of Legends Community tuesdays. This time we got a bunch of concept art as usual, but also two screenshots of the multiplayer interface. You can check that out here.

Just a reminder that we just have one more day for submissions to the Rise of Legends Heaven Caption Contest. We have a good collection but if you want a chance to win some prizes, you gotta enter!

Just a reminder that we just have one more day for submissions to the Rise of Legends Heaven Caption Contest. We have a good collection but if you want a chance to win some prizes, you gotta enter!

Big Huge Games has just released a new weekly screenshot. This one features the Alin hero units coming upon from Cuotl units. You can check it out here.

We got a new batch of concept art for Rise of Legends from Joe at Big Huge Games. Just concept art this time, but we’ve gotten so much now that we have to create two albums to hold everything! One album now exists just for Concept Art, and another for Renders. Check it out yall!

And this one is just awesome. Take my word and download it here (Right click then save target as…) because I doubt you will ever have the oppourtunity to see such an awesome trailer again.

Well some good folks from our little Rise of Legends Heaven community has already created some mods and scenario for Rise of Legends based on the demo version. Most of the mods involved putting the Cuotl into the demo, and one that increases the pop limit. You can thank Lord Of Legends and JoeKing 14 for those and you can check them out here. Joeking14 also even goes on to make a 2v2 map for the demo! You can download that from here.

IGN released their hands-on multiplayer impressions of RoL. They start of by saying:

“Talk about sweet. The Rise of Legends team over at Big Huge Games recently scheduled a series of multiplayer matches with people outside the company and yours truly was lucky enough to spend an afternoon exploring the online options of Rise of Legends. After taking a tour of the front end and trying out the actual game itself, we’re even more excited to get our hands on the final.”

BHG released their new screenshot which show a cuotl vs cuotl battle, and guess what? It looks awesome! Check it out here

Gamespy has just released a new preview in which you can find their hands-on impressions. Dave ‘Fargo’ Kosak from Gamespy allies with Tim Train of Big Huge games in a multiplayer battle and talks game! Check it now from here!

Gamespot has released an article about multiplayer aspects of RoL. And it seems like they are really impressed. They also talk about their experience playing with the Cuotl race, and Dominance. Chect it out here.

Tim Train Drops By to Talk About the RoL Demo

Tim Train, VP of Operations & Development at Big Huge Games dropped by recently at Rise of Legends Heaven (among other fansite) to talk about the recently released demo of Rise of Legends. You can see what he had to say in this thread.

As usual Joe from Big Huge Games has released a batch of new concept art and renders for Rise of Legends. You can check them out from this link. This week’s offering also include an movie file, which is quite large, over 7 megs compressed showing an animation of a Land Leviathan collapsing into a heap of flaming metal! You can download that from here.

We’ve opened up a new album in the gallery section for Rise of Legends Toons. Thanks to GRUNT, we have a funny series to start us off with based on the Cuotl’s Czin the Death God. Check it out here! The album is open to public upload so feel free to add any new RoL Toons if you get inspired to do your own!

Some may have noticed that the forums are down. An upgrade went awry and brought down the forums. It should be fixed by Monday morning. Sorry for the inconvenience.

Well folks, here is your chance to win more Rise of Legends swag! Now that the demo is out, and you can take screenshots of the game yourself. We are having a caption contest for Rise of Legends. 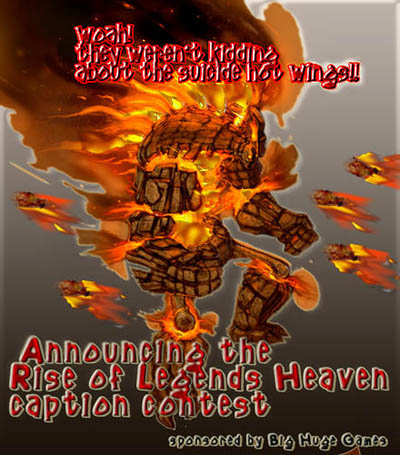 All you need to do is take a screenshot from the game, or existing concept art released by Big Huge Games, and then add your own humour or cool caption for it! The contest will run until April 16’th (Sunday Midnight Eastern Standard Time, that is 1 minute before Monday). Entries should be emailed to One Dead Angel before the deadline. The prizes include: a Rise of Legends Art print for each of the top 3 contestants and also an autographed ROL poster for 1’st place winner. Judging for the top 3 will be by popular vote which will begin after the entry deadline, and voting will run for 1 week up to Friday the 21’st (again midnight EST).

RoL Demo with ALL 3 Races!

With my incredible modding and reverse engineeing skills I’ve managed to put the Cuotl back into the recent ROL Demo, and even some of the units from the 4th race that was dropped! Click on the link to get the patch for this! Who’s your daddy?!