Michael Knutson of PC GameZone also released a Preview of Rise of Legends awhile back that we missed. He talks about a demo of the game where he was able to check out one of the single player campaign modes. You can read the full article from here.

UGO on Rise of Legends

C. Radtke of UGO has released a hands-on preview of Rise of Legends. He sits down with Big Huge Games VP Tim Train to check out the game. He sums up the game with this line “what it does do is deliver a tight-playing strategy experience that’s wrapped up in one hell of a candy shell”. You can check the full article out here.

I was just checking the Big Hige Games site and noticed that there was a new pciture I never saw before. It shows a picture of some kind of rock like monstrosity seen below: 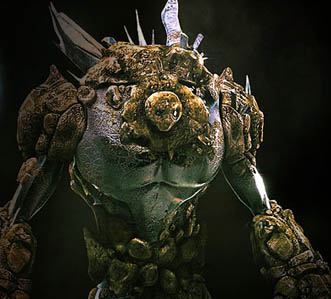 Could this be the Golem unit of the Alim? or Maybe something from the 3’rd mysterious unknown race in Rise of Legends?

Edit: Well we got confirmation from GreyPawn that this is in fact a Glass Golem from the Alim race. But we shall still keep vigilant for clues on the 3’rd race in Rise of Legends!

In the last interview of 2005 GamingSteve.com sits down with the Vice President of Big Huge Games, Tim Train. They talk about Alpha Centauri, Magic the Gathering and the movie Aliens, oh and Rise of Legends! Oh and it’s an audio interview which lasts over an hour, which you download from this link. One more thing there’s some hints on the as yet unknown 3’rd race in the game!

Joe “GreyPawn” Pishgar, BHG’s new community relations manager has dropped by to say hello and to answer questions on Rise of Legends. So everyone please give him a warm welcome!

Oh and ask him some questions on Rise of Legends, so he can earn his paycheck!

Wishing everyone have a safe and happy holiday season!

From the staff of Rise of Legends Heaven!

Big Huge Games finally have a new community relations manager, Joe “GreyPawn” Pishgar. Congratulations to him for getting the job, and good luck! We’ll be looking forward to working with him to bring the Rise of Legends fans the latest news and info on the game!

Starting off, he has kindly given us a pair of exclusive screenshots of Rise of Legends. 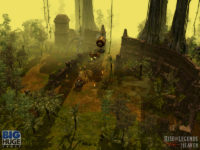 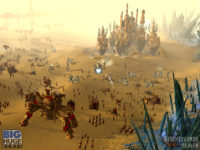 The first is a ethereal scene of a Vinci Scouting party coming upon some buildings deep in the jungle, and the second is a dramatic scene of a Vinci army attacking an Alim city in the desert.

We’ve opened up an RoL fan art album in the gallery.
You can check out the latest submissions here from Stormwinds. If you think you got some skillz..Just email your submissions to me at hg_onedeadangel@hotmail.com so we can show them off to your fellow RoL fans. Only stipulation for now is that the artwork should be related to Rise of Legends and not violate the spirit of the forum CoC. Please include caption that you want to appear under the picture (or a title for the picture).

Next, Game Revolution found their “urge to play rising” when they experienced a portion of the Rise of Legends single-player campaign earlier this week. You can check out the article here.

Finally, Kotaku.com praises Rise of Legends in their latest preview as they eagerly await the release of the full version. You can check that out here.

Welcome to Rise of Legends Heaven!

Following up on their hugely sucessful Rise of NationsTM. Big Huge Games has stepped it up a notch with stunning visuals and great gameplay to develop the spiritual sucessor to their premier title. Rise of Nations: Rise of LegendsTM is now in development due out in early 2006. The game is inspired by the works of Leonardo Da Vinci, the steampunk genre and tales of 1001 Arabian Nights in an epic battle between Magic and Technology! Real Time Strategy rises to a new level once again!

ABOUT HEAVENGAMES, LLC
HeavenGames LLC, based in Lombard, Illinois, is a privately owned web-content publisher geared towards the creation of special-interest sites for Real-Time Strategy and City-Builder games. Its sites, contents, vast amounts of resources, as well as a dedicated staff & management team make HeavenGames’ sites the premier destination for gamers worldwide.