If you are a serious RoL gamer, now is your chance to sign up to help lead the Rise of Legends Heaven Clan. Some of the clan’s former staff have left leaving the positions empty. Check out this thread for more information.

To apply for a leader or officer position, you must be a member of the clan, be active on Rise of Legends multiplayer, and have a fairly good win/lose ratio.

Bridger announces what to look for in the next Tales of Legend episode. It should be very interesting, take a look:

“This Tuesday at 8pm EDT on Tales of Legend we will explore the rest of the researches at the prototype lab. We’ve already discussed the first 3 tiers, which are all very important for the early game, and this week we’ll talk about the other 5 tiers. Are there any worth ignoring? Are there any that you should get every game? Listen in and find out!

We’ll also discuss out Unit of the Week – It’s the Salamander! We’ll talk about all 3 sizes of salamander and figure out if they are really worth getting at juvinile stage, and when you should upgrade, and how many to build!

Lastly we’ll have a Video Replay Review this week from the Gamereplays.org tournament, tune in to find out which one! So check it out on Tuesday at 8pm EDT.”

For those following the Heroes of Aio Mastersleague Rise of Legends tourney, they have a winner! It’s The_Total_Georgie who defeated his older brother Mems to take the First place in their 1v1 tourney! He wins $125 for his efforts. Gigi and ShadowZ will battle for 3’rd place later. You can check out the details at the MoR site.

Two new scenarios have been added to the Rise of Legends Heaven Downloads section. First, we have a multi-player scenario, Chaoskoski Blood, by Agamemnus. And, our newest scenario is a single-player scenario by NaturalViolence called Conflict.

Check out both of these custom scenarios!

Well not really, but in trying on his wings for awhile now. Pepsidude_123 has decided to give his online handle a new super hero identity. Now he will be known to all as Cherub Alex around these parts!

Callebaut, forumer member at RoLH has compiled detailed list of all the Rise of Legends Clans that have websites. You can check out the list in this thread.

Big Huge Games has been working on fixing the RoL Multiplayer server and everything should be back to normal by now. If you are getting errors when you trying to play online, please post your error in here where a BHG employee or another forummer might be able to fix your problem.

HeavenGames Expo (formally known as HGCon) is an online exposition and will celebrate the modders and scenario designers of the HeavenGames communities. Acting as an annual event, HGExpo will run its course over several days, bringing different sorts of competitions, showcases, media releases, and various events to the forumers of HG.

What sets this aside from any other convention is that it is completely online. How is this possible, you ask? Through the bright minds of our staff, new forums are being developed as well as a completely new and original site, which will be used specifically for HG Expo, and as such, will likely only be on for the length of the convention.

With 12 HeavenGames’ sites involved, HGExpo is sure to do well! Support Rise of Legends Heaven in HGExpo by writing guides on Scenario Design or modding. For more information, look here.

Latest news out of the Game Modification Forum is that The Campaign for Rise of Legends Modding Capability has started up, with the aim of gaining access to more files for game modifications!

It’s in the form of a petition, and takes very little of your time to sign, so what are you waiting for? We’ve even provided a link to add a reply saying yes, to sign the petition!

If you’ve ever though about starting designing scenarios for Rise of Legends, now is your best chance! The Scenario Design Workshop is now open. In the Workshop, you can read top-quality guides on Scenario Design and Scripting or submit your own guide. We currently have one guide on Scenario Design basics by storm legion and would love to get some more guides. A Scenario Design Frequently Asked Questions (FAQ’s) page has also been opened and the Game Modifications Workshop is being worked on by Evolved and should look great when finished!

So, open up the Rise of Legends editor and give designing a chance with the help of the Scenario Design Workshop!

Big Huge Games has announced the newest Rise of Legends map, Blossoming Dark. The map will be available with the next patch.

“The ancient Alin Kings commissioned a ring of statues to commemorate Sawu’s banishment to Mezekesh. Time and shifting desert sands swallowed both the monuments and the bitter lessons of Mezekesh. Recently, the monuments mysteriously arose from the sands. The viziers took it as a fortuitous sign. It was only when spires of Dark Glass appeared below the statues, pushing the monuments skyward, that the viziers understood the truth. The darkness they thought was centuries gone had in fact been spreading beneath the sands, waiting for its time to blossom once again.”

For more information, check out the Blossoming Dark page on the Big Huge Games website or go here to discuss the map.

Bridger over at Tales of Legend will be having a roundtable discussion on game balance for Rise of Legends this coming tuesday! Attendies include: “Cookies” (resident Vinci Expert), “Nut” (Random race Expert) and Doug Kaufman, Senior Game Designer at BHG. Check it out!

GreyPawn, the Community Relations Manager at Big Huge Games, has discovered and alerted the community about a slight error in Rise of Legends multiplayer.

“Just a quick note of caution-We have discovered a bug which allows someone in observer mode to sieze control of a player’s units in RoL multiplayer, and we are working on a fix for this issue at current.In the interim, please do not allow any untrusted observers into your multiplayer games.”

The error will hopefully be fixed soon by our friends at BHG, but just be on the look out until then. For more information, go here.

BHG_LeGrand and DarthVeda from Big Huge Games dropped by recently to our forums to give some advice to the scenario design community. They gave out some hints on terrain image files and creating custom units.

The Steampunk and Arabian Nights Forum is building up some steam.
Recently, we’ve had a rather hilarious commercial by HippoInTheHouse, a Zeke themed version of the song ‘Kong-Fu Fighting’ by Evolved (me), and quite a few nations invented by forumers, The Zantuba for instance – and add to that ideas on what the scrapped Kahan Race could have been like.

There’s also a lot of Artwork made by our members in the Fan Art Gallery – some of which could easily pass as professional artwork! 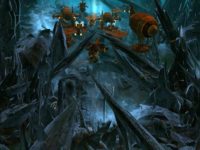 The results are in for the first RoLH Screenshot Contest! The theme for this contest was ‘An Evening Raid‘. We had many great screenies, but the community had to vote on their top three favorite screenies. First place went to storm legion for his screenshot, “Glass Valley“. His screenie can be seen to the right. Second place went to DWIEEB and third place is a tie between SEAMY22 and Paperfriend. Good job to everyone who participated!

–View the main contest thread here.
–View all of the results here.

Tales of Legend Interview with Greypawn

This week’s ToL has a special interview with Joe “GreyPawn” Pishgar (Community Relations Manager for BHG) about the $100k tournament. If you have any question for him post them here. Unit of the week for this show is pirata. The show is on Tuesday @ 8pm EDT. For more info visit ToL website regularly.

Now that the Big Huge Games $100K tournament has been announced. We’d like to get an idea of how many of our forumers plan to enter this once in a life time challenge! So go vote for your choice here!

As mentioned during the weekend. Big Huge Games will conduct a huge tournament with $100,000 in cash and prizes, sponsored by Intel, ATI, and Logitech..

You can check out the full details at the BHG website.

Bridger Breaks the News on the BHG Announcement

Bridger from Tales of Legends on TSN Central breaks the news on the Big Huge Games Announcment. So you don’t have to wait for the official announcment on monday. The big secret to be revealed is a huge Rise of Legends Tournament with a total of $100,000 in prizes. YES, that’s 5 zeros! Intel, ATI and Logitech will be among the sponsors who will award additional prizes to participants! The qualifyer will be single elimination, 1 map games until the top 16, then it will be best of 3 maps (still single elim). The final 8 will be flown to a LAN party for the finals, where the first place winner will win $40,000! You can read the full details at the Tales of Legends Blog site.

The Designing and Game Modifications forums are starting to get a bit more active with many upcoming mods, scenarios, and guides on their way!

Also, Archaeopterix of Ambition Designs has stated that he is working on a scripting guide which should be complete soon if it isn’t finished already. Evolved has announced his upcoming scenario, Inferno Valley, and I, Pepsidude_123 with the help of the other designers at Lucky-Zion Studios, have announced the upcoming multiplayer scenario, Sanctuary. Read about them here.

Finally, if you want to enter the RoLH Screenshot Contest, submit your screenshot as soon as possible. –View the contest thread here.

GreyPawn from Big Huge Games dropped by to say that they will be making a big announcement on Monday. Here is a clue….

Just about from the beginning of Rise of Legends Heaven. Evolved has been one of the most prolific and active posters, one of the first modders of ROL to be on the scene, and even organizing a tourney ladder just for forumers on his own. So after taking a detour on his way to Rise of Legends staff, he finally decided to join the staff officially. Please give him a warm welcome!