Behind the scenes of the upcoming patch

Forumer Paperfriend has alerted us of Big Huge Game’s plans for the upcoming Rise of Legends patch. In this patch, many changes are made to each of the civilizations to perfect balance and some of the maps have been changed around a bit to make gameplay more fun and balanced. Furthermore, a new unit has been added for the Cuotl! The unit, High Priest, has been added to the Cuotl Fane as a Large City Unit. An early glimpse of the High Priest can be seen to the right.

Look for the patch soon and go here for discussions!

Just a reminder for anyone who is interested in the HGExpo banner competition, all banners must be sent to one of the judges by tomorrow, September 25. You do have all day tomorrow to turn in your banner so if you haven’t started, you still have time!

Hope you can participate! For more information, go here.

Rise of Legends player, Djmid71, has recently submitted five new recorded games to our Downloads Section. So if you want to check out some exciting team games, download them here and watch them for yourselves!

Also, I would like to remind everyone here that posting comments and reviews in the downloads section is encouraged. Not only is posting a good way to show the author that you watched the game or played the scenario, but it’s also a good way to give the author constructive criticism.

Tales of Legend ~ Powers and Dominances

In the amazing 15th episode of Tales of Legend, Bridger will delve into the Dominance Spells and National Powers. Is Summon Army the best national spell in the game? How much dps does Starbolt actually do? ToL will also discuss the “exploit” of deleting your miners/caravans before they get killed by raiders, in order to avoid giving your enemy cease fire points and resources. Join Bridger and Montecristo for this great discussion!

Then, in our Unit of the Week section we’ll explore the different Seige units in the game. What makes the Steam Cannon different from the Sun cannon or Glass cannon? Tune in to find out!

Tune in to hear more about all this and more! For more information, go here or go to the Tales of Legends website

Gamespy has posted a review of RoL, viewable at this page, in which they give their views on innovation, inspiration, and the real status of the game. They seem to mention the connection issues a lot, which, to be perfectly honest, are at least partially their fault. Anyway, they do mention a lot of good things, and eventually award it a 3.5 / 5 grade, giving it a ‘good’ rating.

In other news, I have finally done the modding page, and, look out for a little secret from me some of you might be very interested in, coming tomorrow (Tuesday 19th September)…

Sign-ups for the ultimate BHG tournament which has 100k$ prize in total has started. If you want to take place in one of the biggest RTS competitions ever or get more information about it go here. To discuss about this great gaming event visit the 100k tourney thread. Good Luck for the all players who are planning to join the tournament. 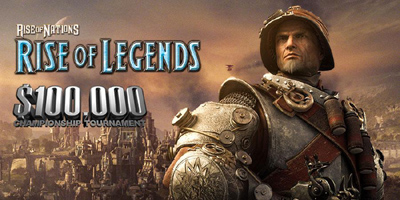 This Tuesday @ 9pm EST, Tales of Legend will delve into the topic of what kind of strategies unfold with specific faction matchups. What the alin do against vinci can be vastly different than what they might do against the cuotl or another alin player. It’s important to know the strong units and the weak units in these cases all around. So we’ll go case by case through the 6 possible faction matchups and discuss what your options are at each level.

Next we’ll open up our Unit of the Week feature with the mighty Air Destroyer. When should you unload a massive barrage of fire upon your enemy? What should you target with missiles and cannons? Can it be used for raiding? How many should you build? Tune in this Tuesday @ 9pm EST, for weak 14 of Tales of Legend!

This week at a glance

It’s been another typical week for Rise of Legends Heaven. We’ve had some updates and news from Big Huge Games as well as some interesting discussions regarding the latest RoL patch and Tales of Legend.

Our forums have been rather quiet but we did get some very interesting and helpful posts by BHG employees, GreyPawn and DarthVeda. Forummer WoL_Ldr_Master has announced his new clan, Warriors of Light. You can check it out here.

The site is still being updated as a cheats page has been added and the fansites, Rise of Legends News and Rise of Legends Library and Phoenix Studios, have been added to the Links page. And finally, benjammn311 has started a new community game, Risk: Aio Edition. Check it out here.

Also, if you live in the Maryland area, check out this thread as the Rosenberg Gallery will be displaying a bunch of concept art from Rise of Legends!

From Concept to Game

Big Huge Games‘ Rise of Legends artwork will be showcased at the Rosenberg Gallery at the Maryland Institute College of Art from September 14th through October 8th.

Angel Zen has put up a Forums Survey to get some feedback from users. I would really appreciate it if everyone can take a few minutes of their time to fill it out. Here’s your chance to give your opinions on what features you like or don’t like about our forums.

You can take the short survey at this link:
http://zen.heavengames.com/survey/public/survey.php?name=forums.
Thanks in advance!

Headed by Jayhawk, Caesar IV Heaven has officially launched making it the newest Heaven. Be sure to head on over there and check out the site which looks amazing if I may say so myself. Also, the Caeasar IV demo is now available and you can download it here or just leave a comment in the forums.

Congrats to the staff members who made this possible and to the two newest HG Cherubs, Duan Xuan and kach. You can check the site out from this link.

Darth Veda from Big Huge Games dropped by our design forum to answer some questions. In particular how to place resource patches. You can check that out here.

The King’s Royal Guard is proud to announce the first Rise of Legends team tournament.

The “Duality” Tournament will be a tournament available to everyone. We hope this will attract players to take part in some high-octane, team orientated games! Players may team with anyone of their choice, thus this tournament is not limited to clan players playing together. We hope this tournament shows off some of the team-play subtleties that can be achieved in RoL. We hope it will prove that a team working together is more than the sum of its parts.

The tournament will take place on Saturday the 30th of September. The exact time and settings are yet to be announced and will depend on the number of signups.

For more information check out the discussion thread here.

Rise of Legends Heaven forumer, Cyrillic has written a very helpful modding tutorial which can be found in our downloads section. The tutorial shows you how to add units to the game and is complete with examples to demonstrate the tutorial.

As most of you know, HeavenGames is planning HGExpo to unite the heavens and boost the scenario design and modding for the RTS games featured. But, before HGExpo gets launched we need a forum banner and the HGExpo staff are asking for your help!

Anyone who is interested, is more than welcome to make a forum banner for HGExpo. The banners will be judged the following members of the HGExpo core staff group; Blackmoon, BP, Cherub Alex, Crazed Ewok, and Empire of Darkness. Out of the banners submitted, one banner will be chosen to be used on our forums.

Requirements for the Banner:
– Banner size must not be larger than 300 by 130 pixels. (width=300, height=130) The banner may be a few pixels smaller in any direction, but not larger. You can copy the image above as a template which is within the size boundaries (width=284, height=119).
– Banners absolutely must not violate the forum’s Code of Conduct.

For more information, please view this thread. We will be looking forward to some great entrants!

Tales of Legends and the little blue people

This Tuesday at 10pm EST on Tales of Legend we’ll be discussing the infamous smurf. Should you be able to create more than one account per CD-Key? Infinate accounts? What effects does this have on the community both negative and positive? Who benefits from this and who loses out? Please note that this week’s show is delayed 2 hours, it’s at 10pm EST instead of 8pm.

Next we’ll have another Unit of the Week segment. This week we’ll take a look at the glass golem. It’s not built all that often, but why is that? Is it underrated? Did the patch make it worthwhile? What should it be used against? Tune in for all the tests and analysis you can handle this Tuesday!

For more information and discussions or if you want a chance to be on Tales of Legends, check out Bridger’s thread here.